Make the Christmas season for your family even more special by making your own homemade Filipino Christmas Ham (Pinoy-Style Christmas Ham)! This is something you will definitely enjoy eating as you will savor every bite of this super tasty cure ham.

Making it is quite enjoyable and really satisfying, too. It requires more amount of time than the usual dishes you make so it is definitely rewarding once you’re finished making one.

In this recipe article, you will learn how to make your own delicious, sweet and savory Homemade Filipino Christmas Ham. Impress your family this Christmas Season by making something special and unique. Continue to read on below to see some tips and some trivia about the Christmas Ham.

What is a Christmas Ham?

A Christmas Ham is a type of Spanish food which is called locally as Jamon. In the Philippines, it is more popularly known as hamon, or as said here in the article–the Christmas ham–since this is usually served during the said holiday season. It is usually made by curing the ham.

Traditionally, it is dry-cured, but modern variations include the use of a brine solution when curing the ham, such as the Filipino Christmas ham. The popular ingredients included for the homemade Pinoy-style are sugar, salt, and pink curing salt for the brine solution and pineapple juice, mustard and some sugar for the glaze.

This dish is usually made and eaten in slices and is more commonly made ready to be eaten when bought in supermarkets and groceries since it can last long when stored properly. But we’re going to make this even more special because we are going to make our very own version of this.

How to make Filipino Christmas Ham?

Making the Christmas ham can be quite a process. But do not get overwhelmed, as we will break down the steps in a way that you can easily follow.

To start: The first thing you want to do is to make the brine solution first. This is a straightforward step. Second, after you’re done with the curing of the ham, you are going to roast the ham in the oven or let it boil. And then you are also going to prepare the glaze.

You have the option to remove the skin of the ham before preparing everything, and that makes the curing time significantly faster (at least three days), but it can be quite a task since the ham is still raw.

The other option is to simmer the ham in boiling water once the curing is done and then remove the skin afterwards. It is much easier since the ham will already be tender at that point.

Go ahead and pair this with a yummy Macaroni Salad and end it with a sweet Pinoy Fruit Salad!

Choosing a ham can vary because there are a lot of different types to choose from. Different hams are seasoned differently, and the flavor may vary, so you have to adjust the seasoning depending on the type you got.

But if you have the knowledge of which ones are more plain than other hams, choose that so you have full control of what you want your ham to taste like in the end.

Thank you and I hope you find this article useful! It’ll mean a lot if you RATE THE RECIPE below and SHARE THIS TO YOUR FRIENDS! 🙂 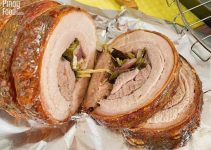 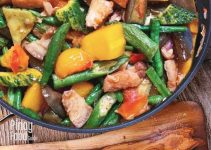 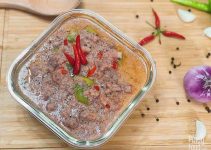